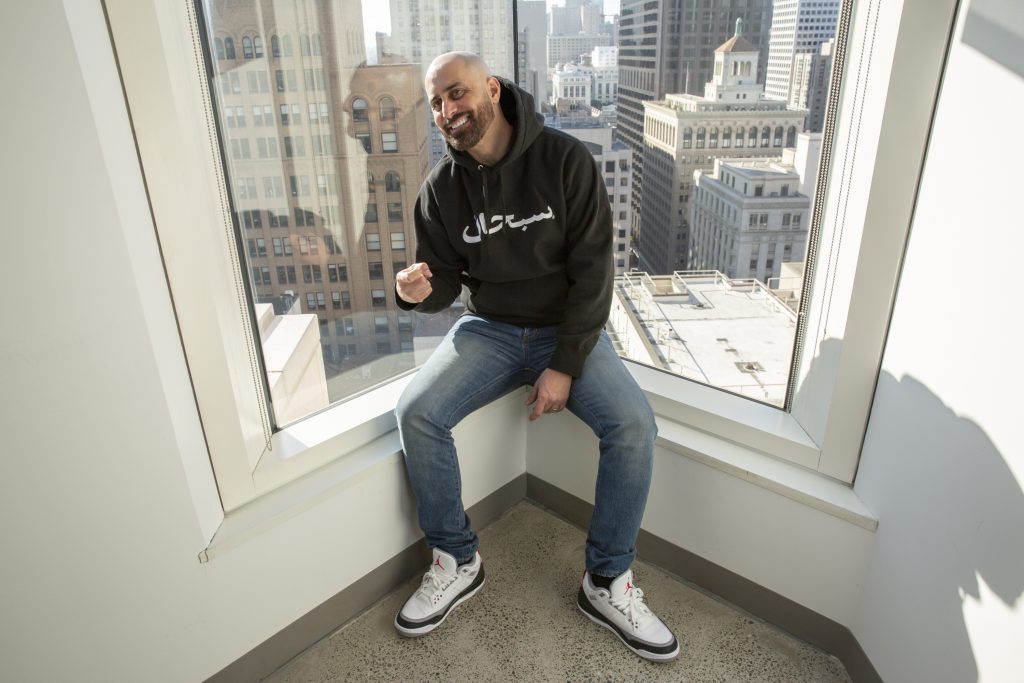 When Ghazi Shami started his music distribution and publishing business in 2010, he knew he wanted his company’s office to be in San Francisco. Since then, Shami has built an empire — literally.

Just days away from the 61st annual Grammy Awards, Shami and his company Empire, headquartered atop a 25-story skyscraper on Pine Street, are riding on a wave of excitement as records they’ve released have been nominated for five awards:  Major. for best traditional R&B performance; Coastcity for best Latin rock, urban or alternative album; and PJ Morton with three nods with Empire, including best R&B performance and best R&B album.

And all this started because before Shami was a music mogul, the Potrero Hill native was a fan.

“I grew up off of the original Bay Area sound,” he says. “Too Short, Spice 1, RBL Posse, Souls of Mischief, Luniz, JT the Bigga Figga, Rappin’ 4-Tay — all of those legendary Bay Area artists. If I wasn’t from San Francisco, this company wouldn’t exist.”

By the late ’90s, Shami was working alongside many of the region’s preeminent hip-hop talents as a recording engineer and producer. Now 42, he recalls spending many nights in the studio with acts like Mistah F.A.B. and the Federation.

“Those guys were my peers,” he says. “Now what’s exciting is watching the artists that I’m nurturing as an executive.”

On a recent Wednesday afternoon at Empire, Dirty South rapper DJ Luke Nasty is meeting with Shami to discuss a few upcoming projects. Shami’s office has the clean, upscale look of a place where big business is handled regularly. Behind Shami’s chair are glass-encased plaques celebrating milestone sales for Empire artists like Fat Joe and Remy Ma, Young Dolph, and XXXTentacion. 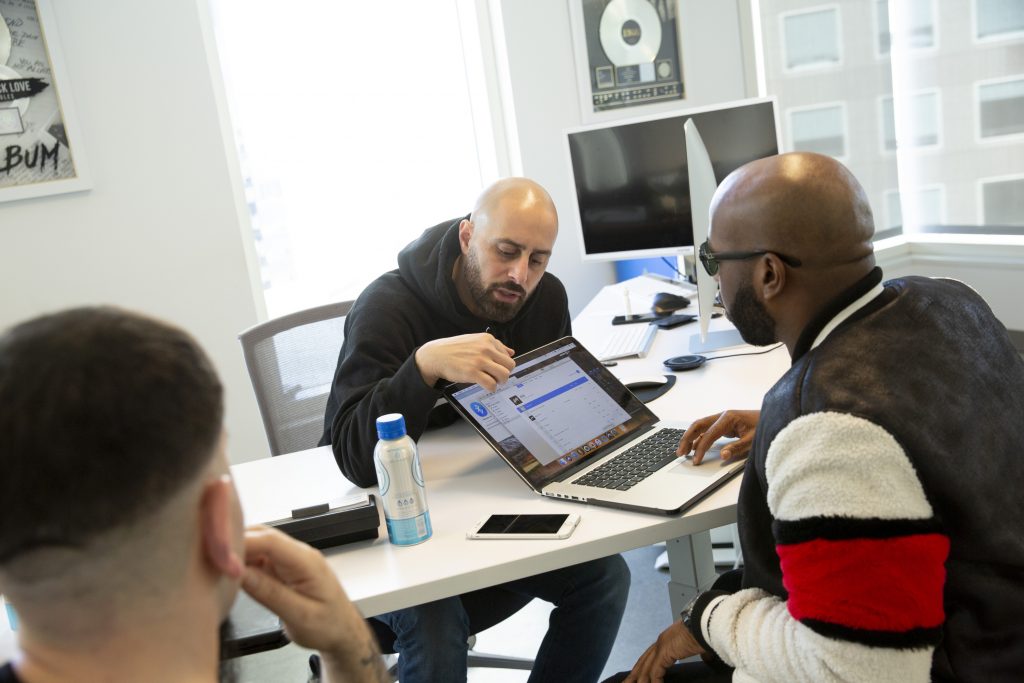 DJ Luke Nasty hails from North Carolina originally, but has been with Empire long enough to remember when the company was just a dream.

“My manager, Waleed Coyote, introduced us in Greensboro,” Nasty recalls. “I saw Ghazi come up from nothing. I saw the staff go from three people in one room with two computers to where he’s at now — on the top floor of one of the tallest buildings in San Francisco. Empire got me two gold records. I think that’s pretty dope.”

While Empire is a company with many facets, the beating heart of the operation is proprietary software that distributes content to music services like Spotify, Apple Music and Pandora. It also stores the metadata of tracks, retrieves royalty reports and offers a variety of promotional tools. With this technology in place, Shami is able to scour the Bay Area and beyond for rising talent in need of exposure, which has led Empire to be among the first to work with eventual superstars like Kendrick Lamar and Cardi B.

“My mantra has always been that access creates culture,” Shami says. “I basically saw a void in the marketplace that I knew needed some attention. I wanted to be an access point for people to perpetuate the culture of what Bay Area music is all about.”

Since Empire began nearly 10 years ago, the organization has worked with many of the biggest names in the world of rap. Following early successes with local artists LoveRance and Jonn Hart (their respective records “Up!” and “Who Booty” both charted on the Billboard Hot 100), Empire’s roster of talent has rapidly expanded to include major names like Lamar as well as Schoolboy Q, Migos, Anderson .Paak and Kodak Black. They’ve all had tracks or albums independently distributed through Empire.

Empire’s penchant for releasing hits led the company’s roster to gain six nominations at the 2017 Grammys. With five nominations at this year’s Grammys, Shami hopes to finally see one of the artists he’s worked with come home with a gold statue for an Empire release.

“It’s very surreal,” Shami says. “I remember watching it on TV for so many years. Suddenly you hit fast forward, and we’re sitting in the crowd and hanging out with artists who we’ve literally seen go from zero to 100. It makes everything that you’ve worked for worth it. It connects it all together.”

No matter the outcome at the Grammys, Shami is still pushing forward, putting the finishing touches on his next venture: a 10,000-square-foot recording studio on Bryant Street in the South of Market area.

“It’s a really dope facility,” Shami says. “It was one of the nicest studios in the Bay Area until it was abandoned for various reasons.”

Now Empire is about two months away from reopening the doors at the former Studio Trilogy, where artists like MC Hammer, Kanye West, and will.i.am once laid down tracks. Shami envisions his new project as a way to entice hip-hop artists to start recording music in San Francisco again.

“As a company, we’ve done an amazing job of finding hit records,” he says. “I want to be equally amazing at creating them from scratch.” 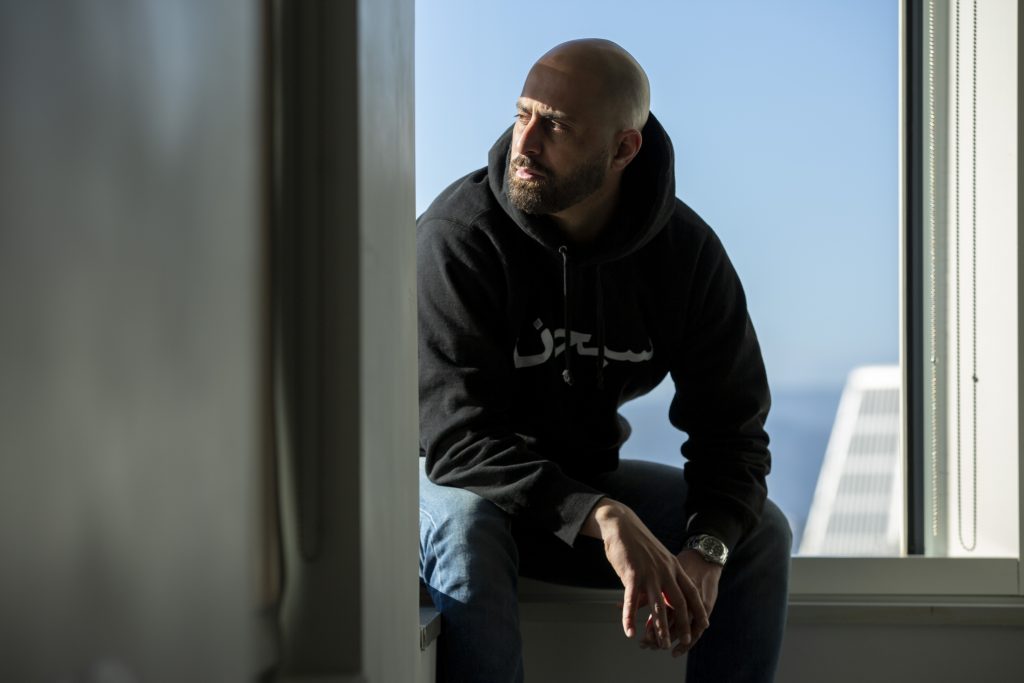 When Shami looks back at the kingdom he’s created, he believes there’s a clear line that leads from his childhood to his current success. As he sees it, his mission has never changed. The goal has always been music.

“It’s resonated with me ever since I was a little kid,” Shami says. “I used to take tape decks apart when I was 3 years old to see how they worked. Now I take artists apart and rebuild them and turn them into stars.”